Second TAG Day an even bigger success than first 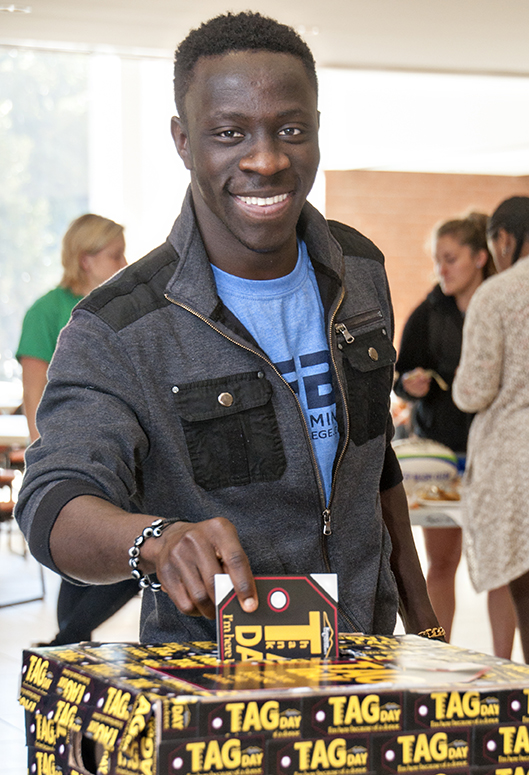 Oct. 26, 2015 – Kennesaw State’s second Thank A Giver (TAG) Day – held on Oct. 22 to honor and recognize the generosity of donors who have provided scholarships and other amenities to the University – was an even bigger success than the first.

TAG Day, a collaborative effort between the Office of Development and the Student Philanthropy Council (SPC) to promote a better understanding of philanthropy at KSU, took place for the first time on March 3. The fall event involved both the Kennesaw and Marietta campuses on a warm, sunny Thursday from 10 a.m. until 3 p.m.

Last Thursday, 1,633 thank you cards were written, primarily by students to donors, bettering the SPC’s goal of 1,500. In all, the number of cards that will be sent to donors is up about 50 percent over March’s TAG Day total.

“The completed thank you cards will be mailed out to donors next week,” annual giving coordinator Anna Webb said. “Recipients will include faculty, staff, alumni, retirees, current students and friends of the university who have given a gift of $10 or more to any Kennesaw State or Polytechnic Foundation fund since April 1.”

KSU students, faculty and staff came by seven different locations on the campuses to “Thank A Giver” with their notes of thanks. The highest participation was at the Social Sciences Building on the Kennesaw campus, where 471 cards were written, followed by the Joe Mack Wilson Student Center on the Marietta campus (253).

Approximately 200 of Kennesaw State’s 600-plus scholarship recipients were on the campuses last Thursday wearing stickers that read, “I’m here because of a donor,” which almost doubled the March turnout of scholars.

“TAG Day was held in March and again in October so that we could determine which time of year would have the greatest success,” Webb said. “In the future, the event will be held only in October.”

Throughout the day on both campuses, 50 gift tags were placed on buildings, artwork, benches, swings and other items that were funded by private donations as a way to show a visual representation of the impact individual and corporate giving make at KSU.

In 2014, more than $10.5 million was given to the University in donations, including cash, stocks and in-kind gifts. Donations are used for scholarships, facility improvements, building additions and expansions, endowed faculty, laboratory equipment and books for the libraries.