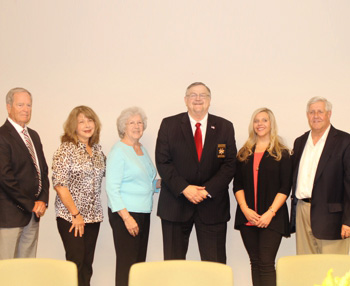 “I have been engaged with the criminal justice program at KSU for years and watching the program grow and attract high quality students that want to serve in law enforcement is inspiring to me,” Warren said. “My wife Penny and I have previously worked with (Kennesaw State Director of Development for the Bagwell College of Education) Debra Day in supporting community programs and the opportunity to create an endowment to support students at KSU seemed like a perfect way to positively impact the law enforcement profession.”

Dr. Robin Dorff, dean of the Kennesaw State College of Humanities and Social Sciences, met with Sheriff Warren and his wife on March 11 to officially sign papers and establish an endowment of $25,000. The endowment will be used to provide a scholarship each year to a student majoring in criminal justice, with preference given to those who are interested in a career in law enforcement. The first scholarship, in the amount of $1,000, is scheduled to be awarded for the Fall 2016 semester.

“It is my hope that this endowment will make it possible for a student considering a career in criminal justice to take the next step in earning their degree,” Warren said. “The idea that for every year moving forward, another student will have a similar opportunity gives me great hope for our future.”

Warren joined the Cobb County Sheriff’s Office in 1974. He was elected sheriff in 2003 and is currently serving his third term as the chief executive law enforcement officer of Cobb County. In 2014, Warren was chosen as the Sheriff of the Year by the Georgia Sheriffs’ Association.

Warren’s wife Penny, a social worker in Cobb County since 1976 who has been associated with schools for more than 25 years, has also made an impact in the area. In 2009, the couple were presented with the Founders Award at the Center for Family Resources 13th Annual Oscar Gala and received the Liberty Bell Award from the Cobb County Bar Association.

“Creating this endowment has been a wonderful experience,” said the sheriff. “Having been blessed with the ability to support my passion for law enforcement and supporting higher education has been a very rewarding experience. We welcome and encourage others to support the students at KSU through charitable giving in support of education.”